The Hay is in the Barn! 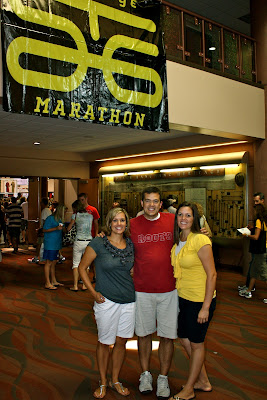 If you juice an apple, you will not get lemonade.  If you indulge in eating multiple Pop Tarts every day you will not have the body of a super model.  I was reading an article last week in which a coach told his runners, in regards to the week before a race, "The hay is in the barn boys" Whats done is done. You can only get out what you've put in.  And so it goes with marathons...if you don't get in your long runs, you can't make the longest one.  This is a principle I am quite familiar with.  I added a lot of bales of hay to the St George Marathon Barn.  They were in the choices I made big and small as I prepared. 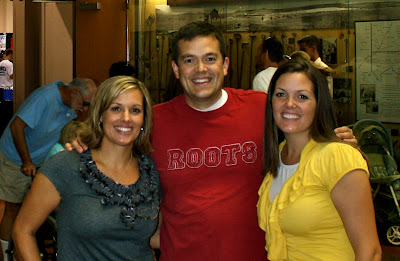 I chose to run a race that my brother and sister could run with me. This was Billy's third marathon, my second and Janelle's first!  We all chose different training programs, and we all encountered setbacks in those plans.  For Janelle and I it was knee injuries.  I chose to try to learn to jump on the wakeboard just 6 weeks before the marathon, not so bright, I know.
I chose a little retail therapy the day before the race to calm my pre race jitters 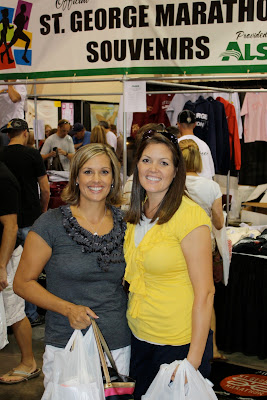 I chose to forgo the clinics and classes held at the Expo the day before as well, the pool seemed a little more enticing...

As much as I tried to resist, I gave in and chose to believe that just maybe that little hollogram sticker, likely made from recycled CDs, attached to a rubber band was the reason I was stronger, more balanced, and flexible.  My mom chose to believe in it with me.  We bought them at the expo and Janelle and I ran with them the next day.  Wonder Twins activate! 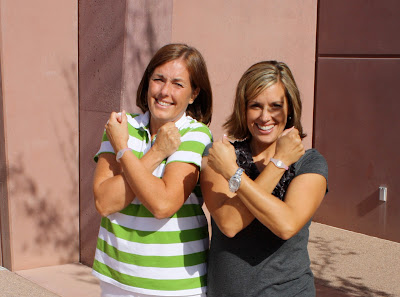 I chose to follow Reed's example and and double up on the chocolate the night before the race.  Chocolate always seems to be the best choice, and the brownies were divine! 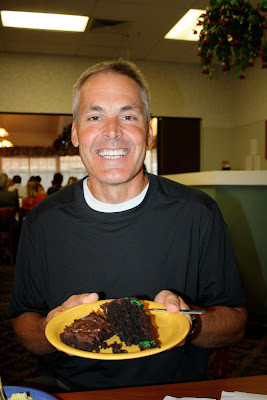 I didn't choose not to sleep the night before the race, but I did end up laying there wide awake unitl one hour and 11 minutes before I was supposed to wake up at of course, o' dark thirty.  Janelle said she didn't sleep much either.  Nevertheless we decided to smile before we headed out the door for breakfast at 4:40 am!! 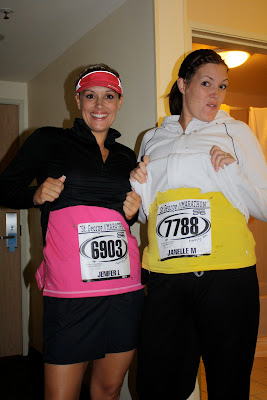 I chose not to bring my real camera to the starting line this year, so my pictures didn't come out very clear in the wee hours of the morning. 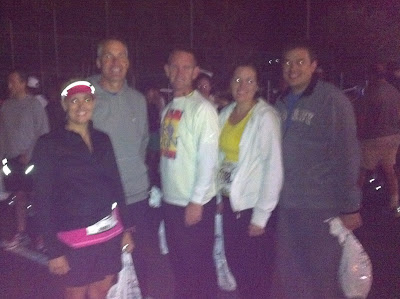 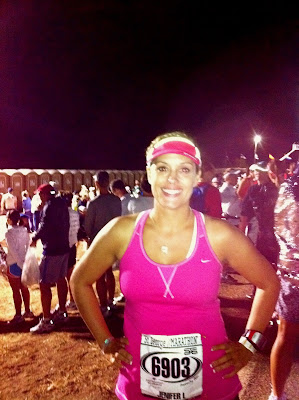 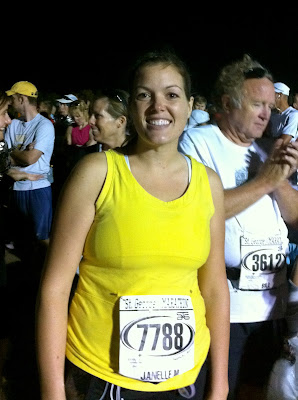 I decided maybe I could hang with Billy and Corey for the race.  They wanted to average 8:23 per mile, but ened up stayng closer to 8:00 per mile.  I knew I couldn't keep that up for too long... I sent them ahead of me somewhere between mile 6 and 7.   I stayed about 100 feet behind them for another mile or so and then they slowly faded from my sight. 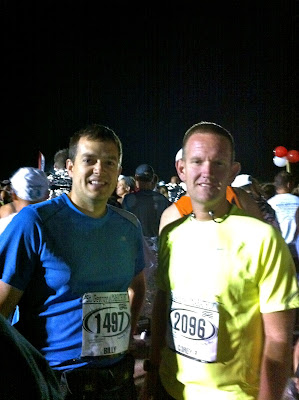 I decided that even though it might slow me down, I would take a few pictures while I ran...I wish they were clear but I chose to keep running while I snapped and the result was blurry pics.  Another example of only getting out what you put in.  I realized it at the time as well but decided it was worth a shot. 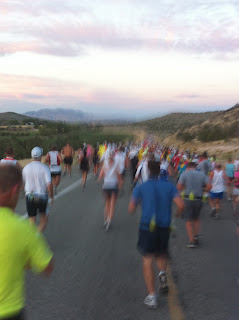 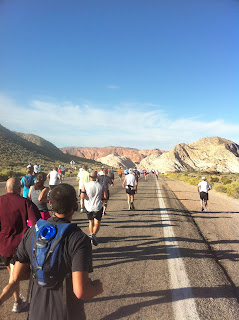 By mile 10 I knew I had pushed it a little too hard at the beginning, and chose to slow down, and try to recover a bit. I also chose to stop at every single aid station and get my hamstring rubbed down with loads of Bengay.  It helped some.

This was the hottest start St George Marathon has had on record and I was nervous of how the heat might affect me, so I drank lots of water at every aid station.  Probably too much.

By mile 18 I was a bit exhauseted.  I used the bathroom and chose to walk up a long hill and watched as the 4:00 hr pace group passed me by.  I tried running after that but I could only make my legs go for another 30 seconds or so and I had to stop and walk again.  By mile 20 I couldn't run anymore at all.  As I walked the next mile I thought about what my choices were at this point.  I considered how I would feel about the results of these decisions.  By the time I reached the 21 mile marker I knew just what I was going to do.  I flagged down a shuttle and kindly stated,"Hi, I'm ready to be done"

I really was.  I had missed out on a few long runs with the timing of my knee injury.  I chose not to do one of them once I had recovered, fearing that it was too close to the race.  The furthest I had run was 16 maybe 17 miles in my training.  As I rode the shuttle in to the finish line, the thought came to my mind, the hay is in the barn.  It was just not enough to get me through.  I was thrilled that my knees held up great, and that while my hamstring was tight it wasn't enough to stop me from running.  I knew I could walk the rest of the way in to the finish line, but that would just take a lot of time to do and I don't know that I would have felt any more sense of accomplishment from finishing that way, than the way I did.  I had a great run while it lasted. In fact one of my fastest.

Reed crossed the finish with a smile and a wave 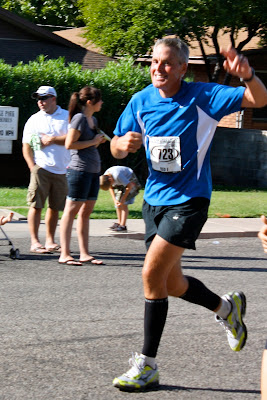 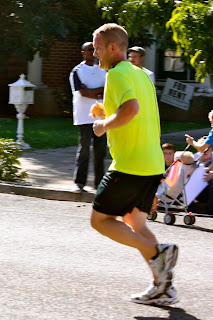 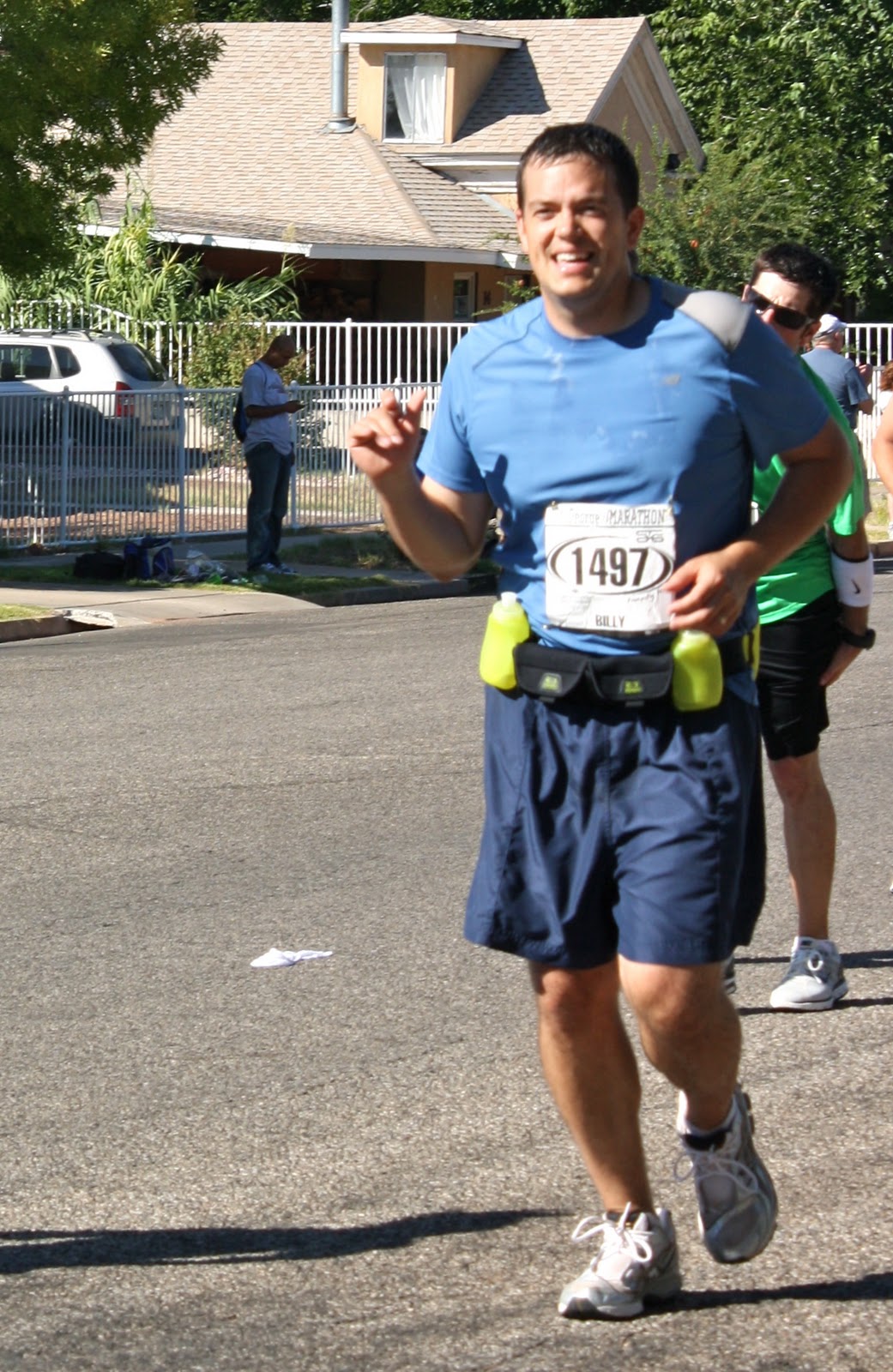 And I rode the bus. 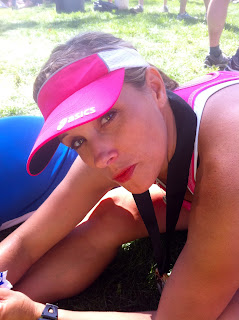 I went into the runners area when I got back to the park to get a popsicle and wait for Janelle to finish.  When the shuttle picked me up we drove back up the course a few miles to pick up a few others, and we passed Janelle around mile 18. She had a huge grin on her face and was talking to another runner next to her.  She finished the race still smiling. 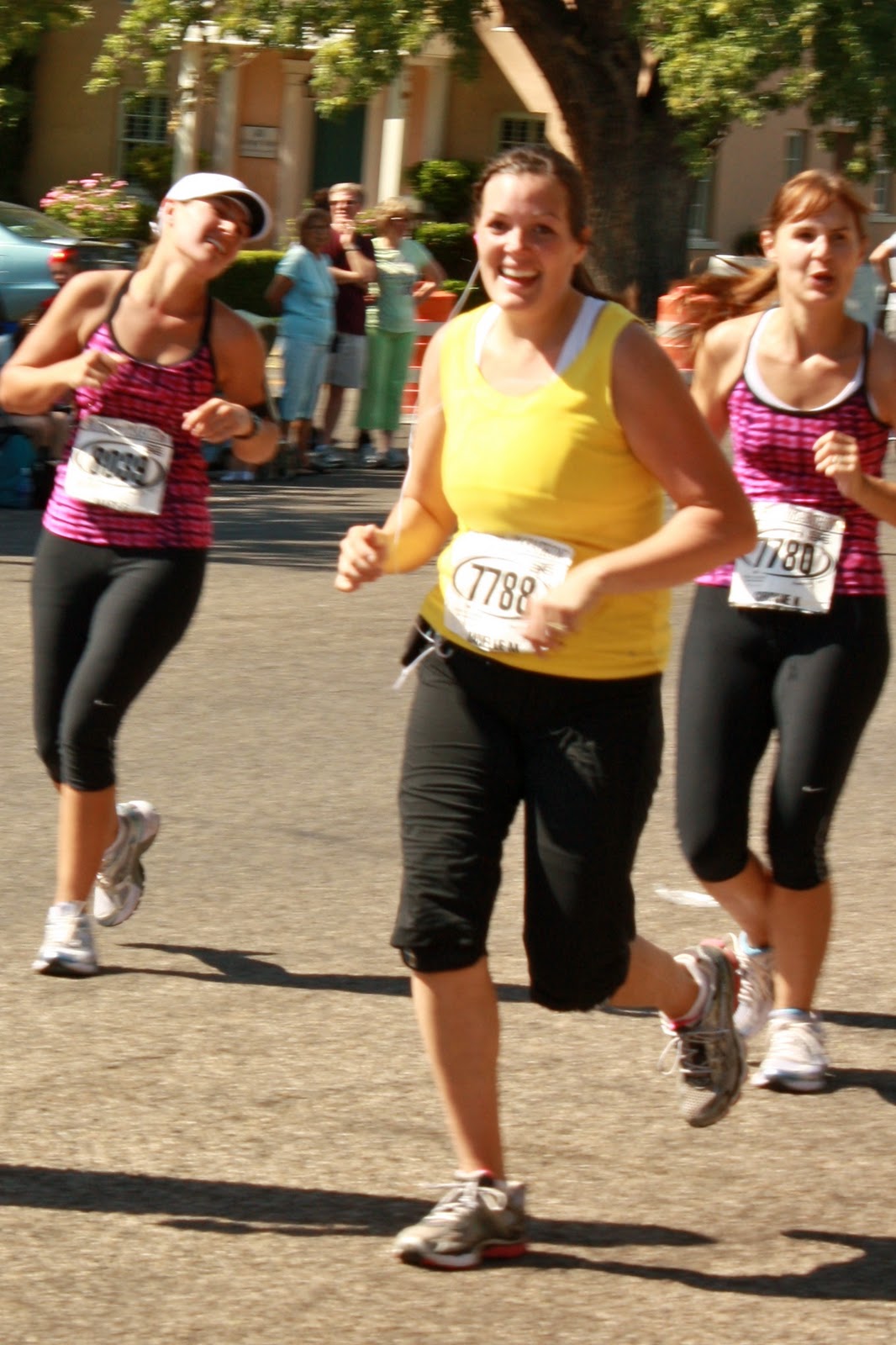 I had a moment of regret when they took my bib from me on the bus and another very short lived one as we posed for pictures after the race.  It's no fun to be the only one of the group that didn't see it through. 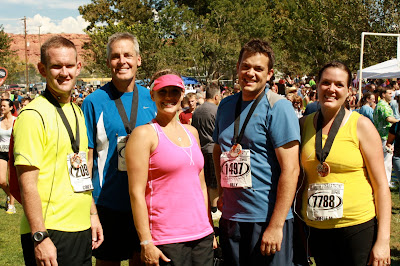 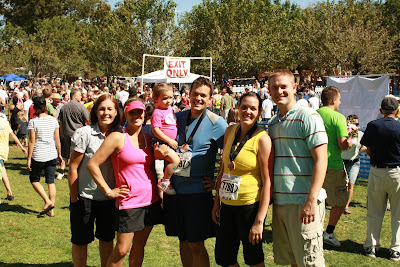 I have no injuries, and no excuses this year.  I got out of this race exactly what I put into it.  My results matched my efforts, so you won't be hearing me complain.  The bales of hay from this race are already in the barn, 21 miles worth.  I think I'll add to it and rock the next one! 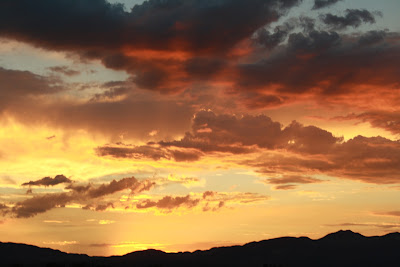 There's always a silver lining!
Posted by justjen at 11:53 AM

Jen--you guys are all amazing. The most I've done is a 10K! I'm glad it was a good experience!! You'll run it all next time fooor sure! :) 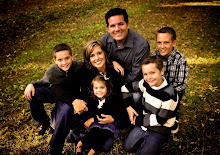